Prior to joining Sinavation Ventures, Xuanwu completed his Ph.D. in the Department of Computer Science and Engineering at The Hong Kong University of Science and Technology (HKUST) under the supervision of Prof. Huamin Qu in HKUST VisLab(2016.09 - 2020.06).

He obtained his B.Eng. degree from Software School, Shandong University in June 2016. During his undergraduate studies, he was also a research assistant at The Interdisciplinary Research Center (IRC) supervised by Prof. Baoquan Chen and Prof. Yunhai Wang.

Enjoy every tech improving moment and achievement obtained by coding.

Not only the social skills but also the leadership enhance my horizon towards this gorgeous world.

Endless passion to facilitate the computer and technology world. IEEE Transactions on Visualization and Computer Graphics (Proceedings of VAST) October 2018
The emerging prosperity of cryptocurrencies, such as Bitcoin, has come into the spotlight during the past few years. Cryptocurrency exchanges, which act as the gateway to this world, now play a dominant role in the circulation of Bitcoin. Thus, delving into the analysis of the transaction patterns of exchanges can shed light on the evolution and trends in the Bitcoin market, and participants can gain hints for identifying credible exchanges as well. Not only Bitcoin practitioners but also researchers in the ﬁnancial and statistics domains are interested in the business intelligence behind the curtain. However, exploration and comparison among multiple exchanges has been rather limited due to the lack of efﬁcient tools. Previous methods of visualizing Bitcoin data have mainly concentrated on tracking suspicious transaction logs, but it is cumbersome to analyze exchanges and their relationships with existing tools and methods. In this paper, we present BitExTract, an interactive visual analytics system, which, to the best of our knowledge, is the ﬁrst attempt to explore the evolutionary transaction patterns of Bitcoin exchanges from two perspectives, namely, exchange versus exchange and exchange versus client. The BitExTract system’s analysis concentrates on three different levels: the overall-market level, the inter-exchange level, and the individual level. In particular, BitExTract summarizes the evolution of the Bitcoin market by observing the transactions between exchanges over time via a massive sequence view. A node-link diagram with ego-centered views depicts the trading network of exchanges and their temporal transaction distribution. Moreover, BitExTract embeds multiple parallel bars on a timeline to examine and compare the evolution patterns of transactions between different exchanges. The effectiveness and usability of BitExTract are demonstrated through three case studies with novel insights and further interviews with domain experts and senior Bitcoin practitioners.

👇 Video (The online demo is on the way…)
See Live The theme of VAST Challenge 2017 is to explore the reasons why the number of a kind of bird, Rose-Crested Blue Pipit is decreasing in Boonsong Lekagul Nature Preserve. It is divided into three Mini Challenges and a Grand Challenge.
Mini Challenge 1 (MC1) is related to the transportation in the preserve. With the records of the vehicles passing through the preserve in a 13-month period, we discovered 9 traffic patterns and some other outliers.
Mini Challenge 2 (MC2) requires the discovery of the unexpected patterns in the data of the monitors’ readings of different chemical pollutants and further the localization of the source of each pollutant.
In Mini Challenge 3 (MC3), 12 remote sensing images with 6 spectra were provided, based on which we developed the patterns of different areas and analyzed the changes along the timeline. As for the traditional air data, on the one hand, they can be regarded as time series data that display the changing trends. On the other hand, they are also separated, individual data, which can describe everyday situation. Inspired by Cheng’s previous paper, visualize the air data into a “tree” and streamline. The contribution includes implementing ‘L-System’ by JavaScript(Web) and so on. This work is still under processing and have more to improve and perfect. 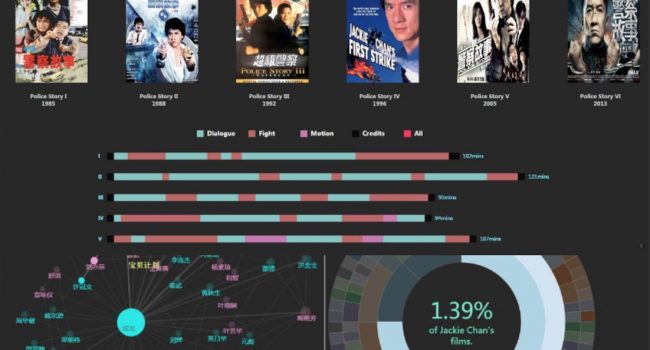 Based on my admiration to Jackie Chan, I collect the data of Jackie Chan’s movie by Python Spider. Form the data using the typical visualization patterns.

In order to have a more comprehensive way towards the history data. We build this HMap website. Combine the map, timeline and some user guide interactions. We provide two languages,Chinese and English, supported.

Owing to some insufficiency, the website is still under developing. So we build it on our university’s Intranet, which is inaccessible from the Extranet. The original bus data of Geneva include the routes, stops, number of passengers and etc. In order to present the trend of public traffic more efficient. I implement this website with some interactions like the traffic animation of the whole day, listing specific routes and stops the users choose. As for the animation, the timeline can not only play sequentially, but also allows to adjust the speed and click somewhere particularly. Owing to the uneven campus distributions of Shandong University, the importance of exchanging information via students has enhanced day by day. Based on this exceptive situation, I developed this platform, Shiyida (世易大 in Chinese), used Node.js, Redis & Aliyun ECS within two months, including developing and testing.

Some Words from Them

Waiting for Your Testimonial...

Drop me a line